OUR MEMORIES OF MAYNARD B. JOHNSON

We  are forever grateful for the impact Maynard Johnson had on each of our lives.  Maynard Johnson was born in 1921 and passed away this month (July 16, 2017) at the age of 95. Maynard married his sweetheart, Madeleine (who passed away January, 2017), and together, they raised their family in Minnesota. Maynard made many contributions to our local Lakeville community, which included a vision for the Airlake Industrial Park & economic development of Lakeville, Minnesota. He was instrumental in starting what is now known as “Pan-o-Prog”   (Panorama of Progress), as Lakeville’s annual community celebration. Maynard was even the Grand Marshall of the event in 1983!

Our companies’ owner and co-founder, Jack Matasosky, has long considered Maynard to have not only been his mentor, but a lifelong friend, with a relationship that began when Jack was hired by Maynard in 1978. After Jack co-founded APPRO Development, and later, CERRON Properties, Maynard continued to be a trusted adviser and valued confidante .

We hope you enjoy learning more about this fascinating Lakeville pioneer, who is forever in our hearts!

Below, you will find a few fun pictures of Maynard Johnson along with some of our favorite memories.

There was the time that Maynard placed an advertisement for Airlake. He set up a desk and phone in one of the empty lots, complete with name sign on the desk and a briefcase full of money. By the way, the money in the photograph is REAL! 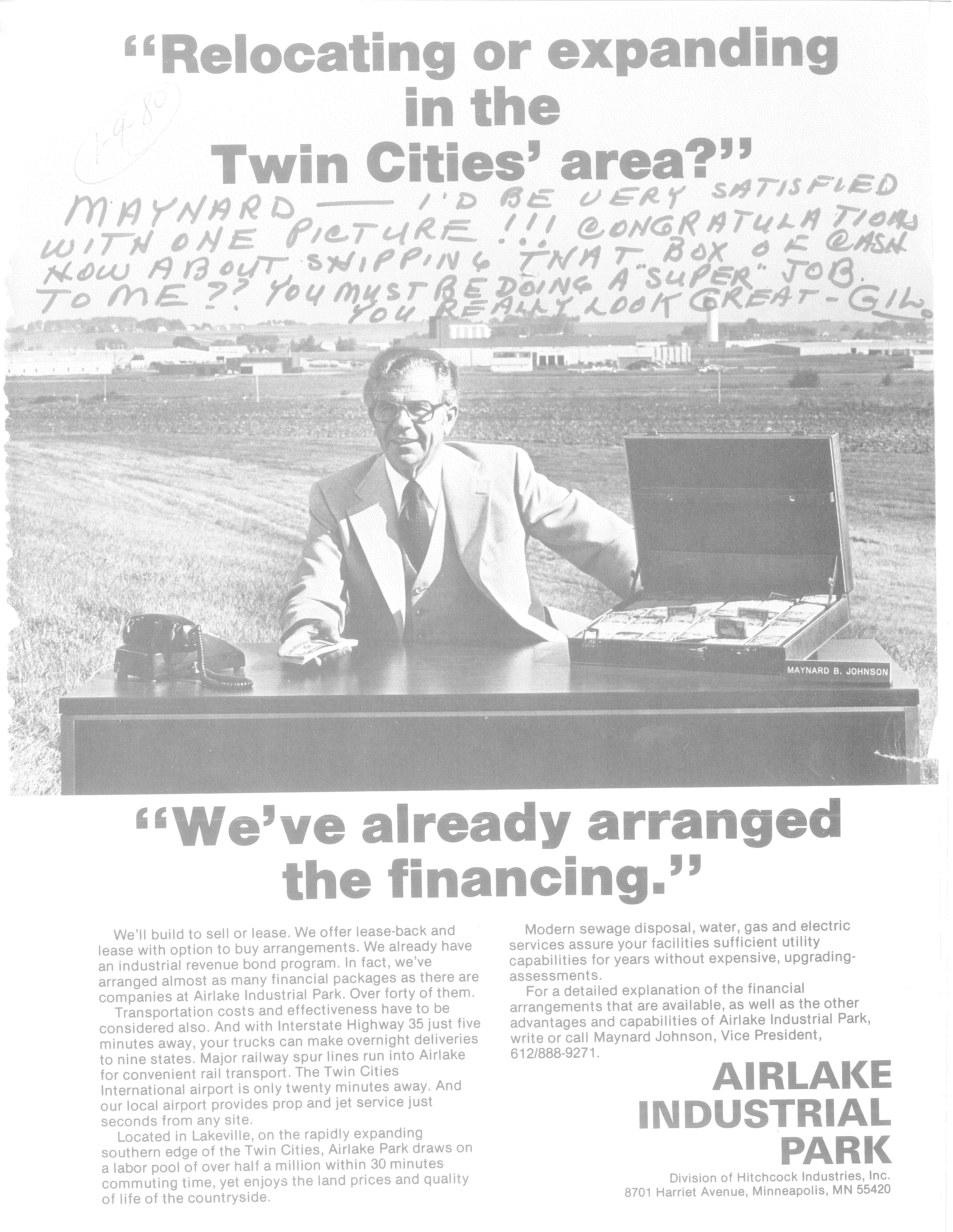 Maynard had a knack for big ideas which often included big celebrations…like bringing in the local marching band to celebrate the grand opening of the Airlake Airport. Or, helping to get Pan-o-Prog (Panorama of Progress) started in Lakeville, MN. 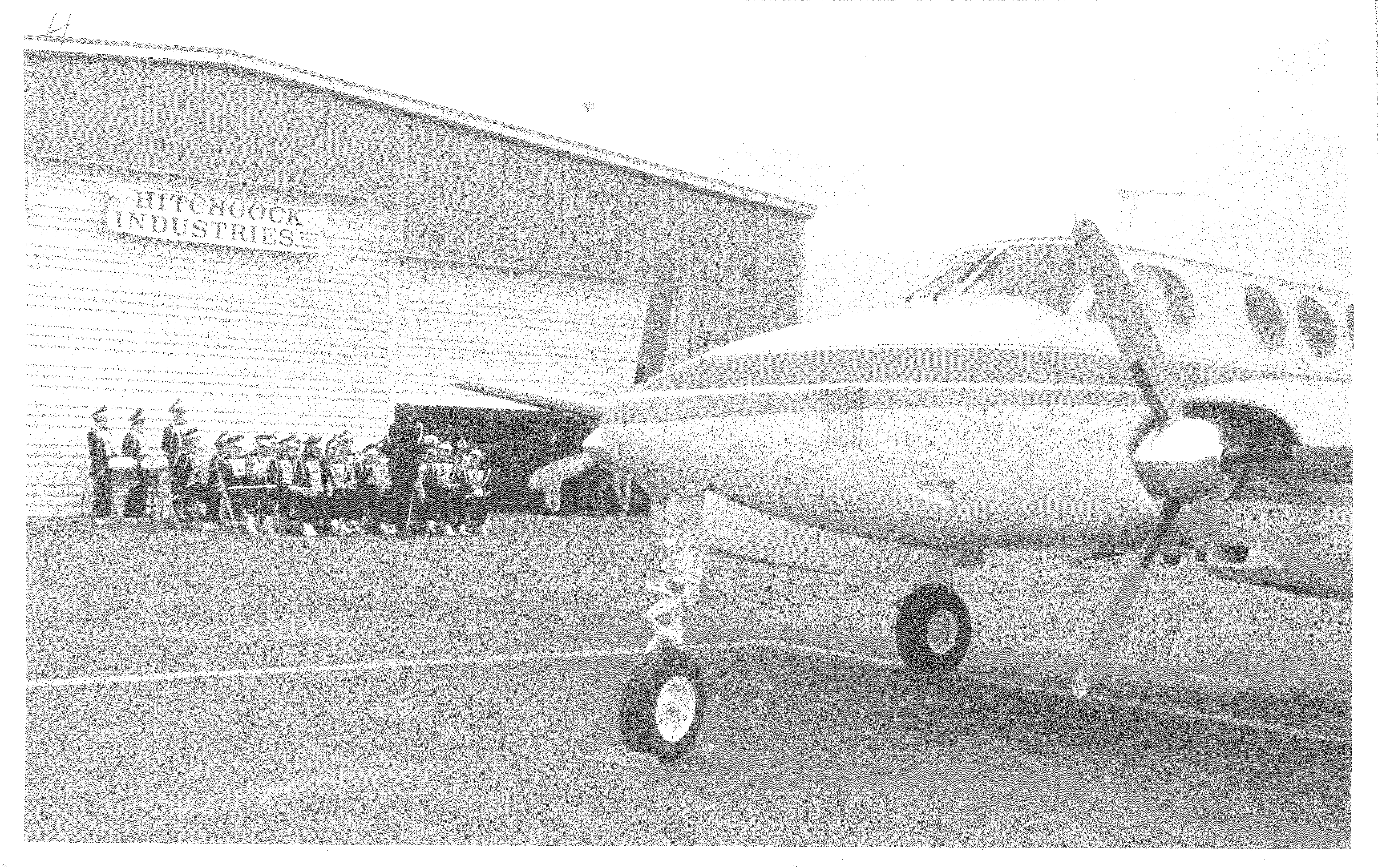 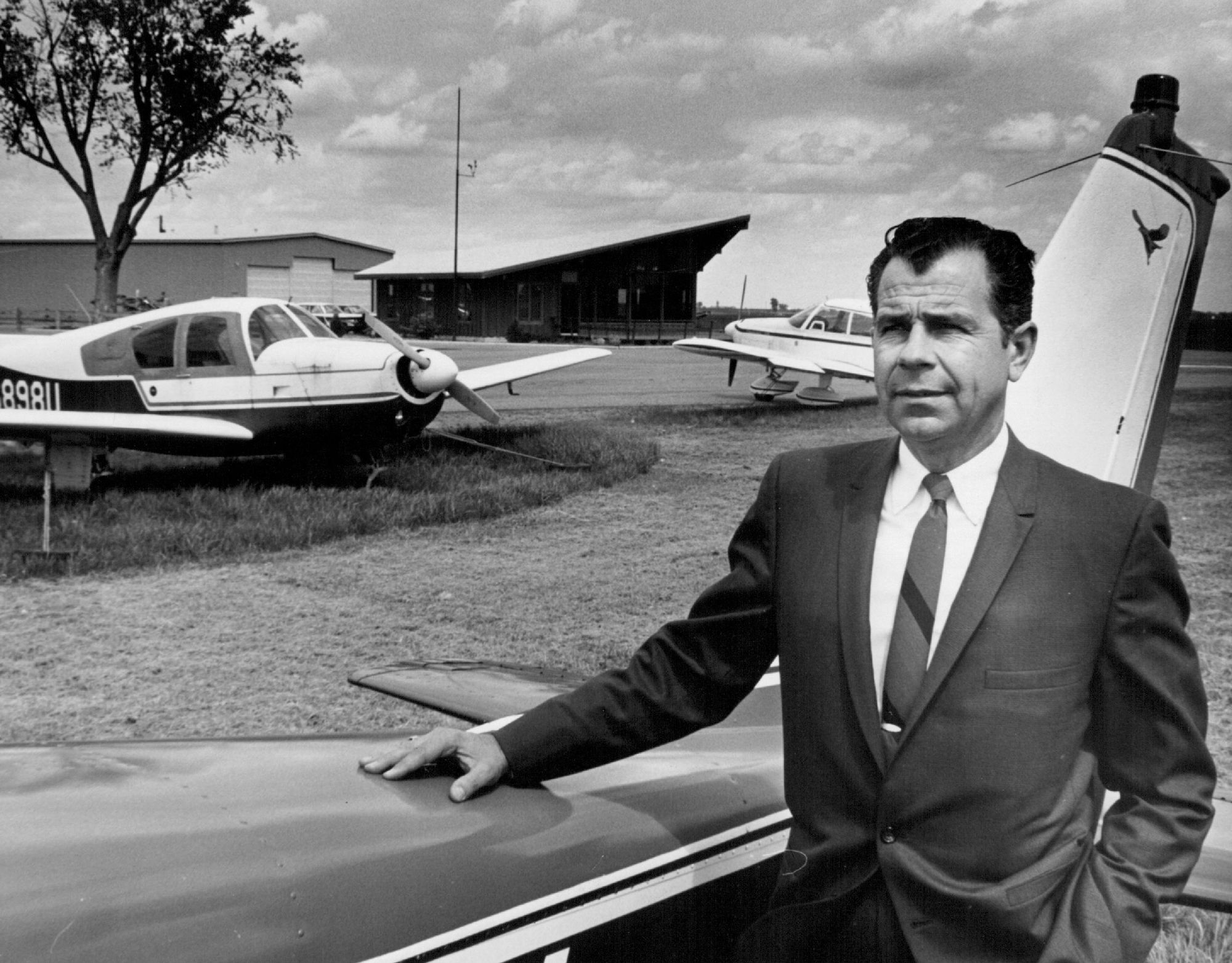 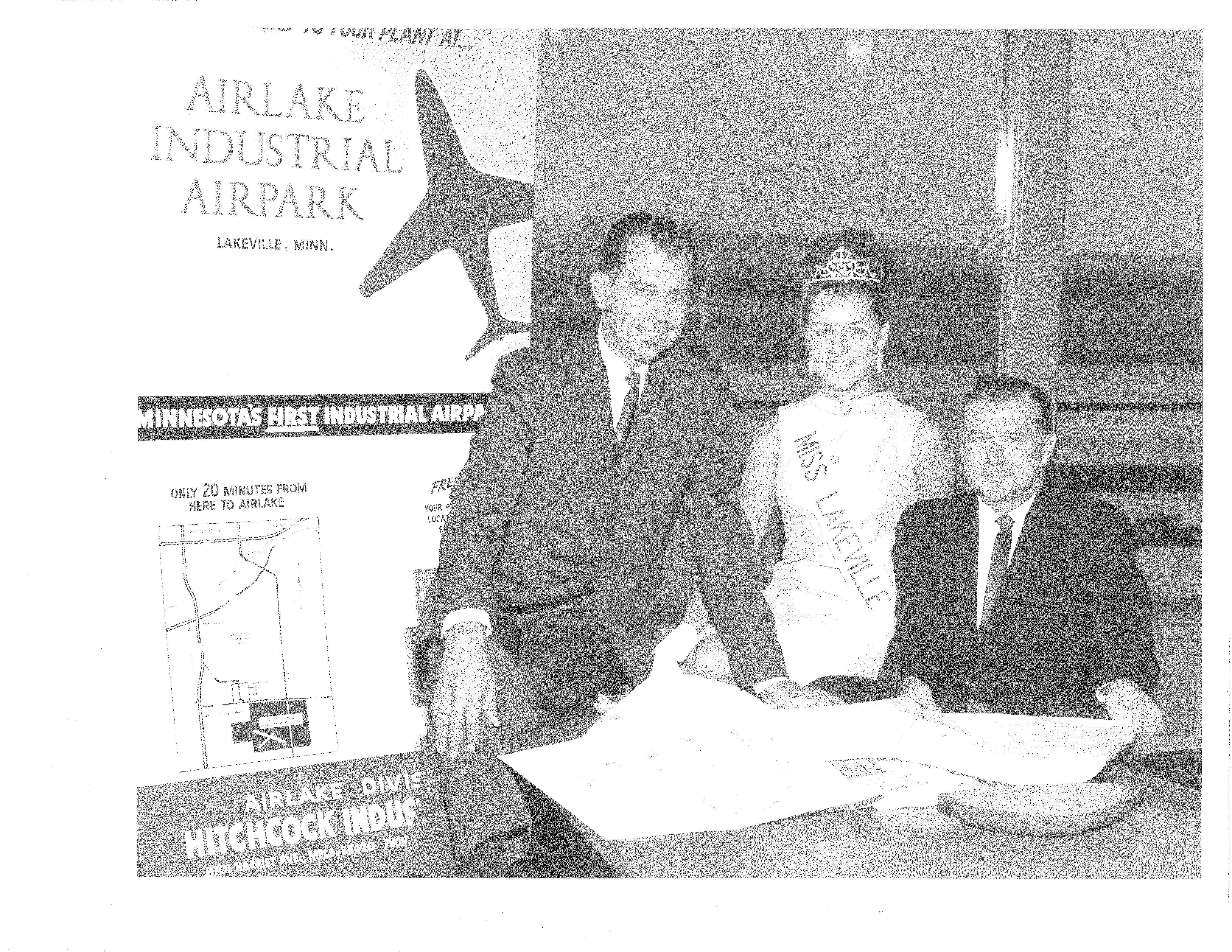 After Hitchcock Industries purchased 1,600 acres of land in south Lakeville, Maynard had a vision to make the first of its kind industrial park…what is today known as Airlake Industrial Park. Today, Airlake is home to approximately 150 businesses with just under 250 acres of the original land remaining.

And, a very special and cherished memory, was of Maynard’s attendance of APPRO and CERRON’s anniversary party. Shortly after Maynard’s wife, Madeleine, passed away, he attended this event, to everyone’s surprise, and delight! 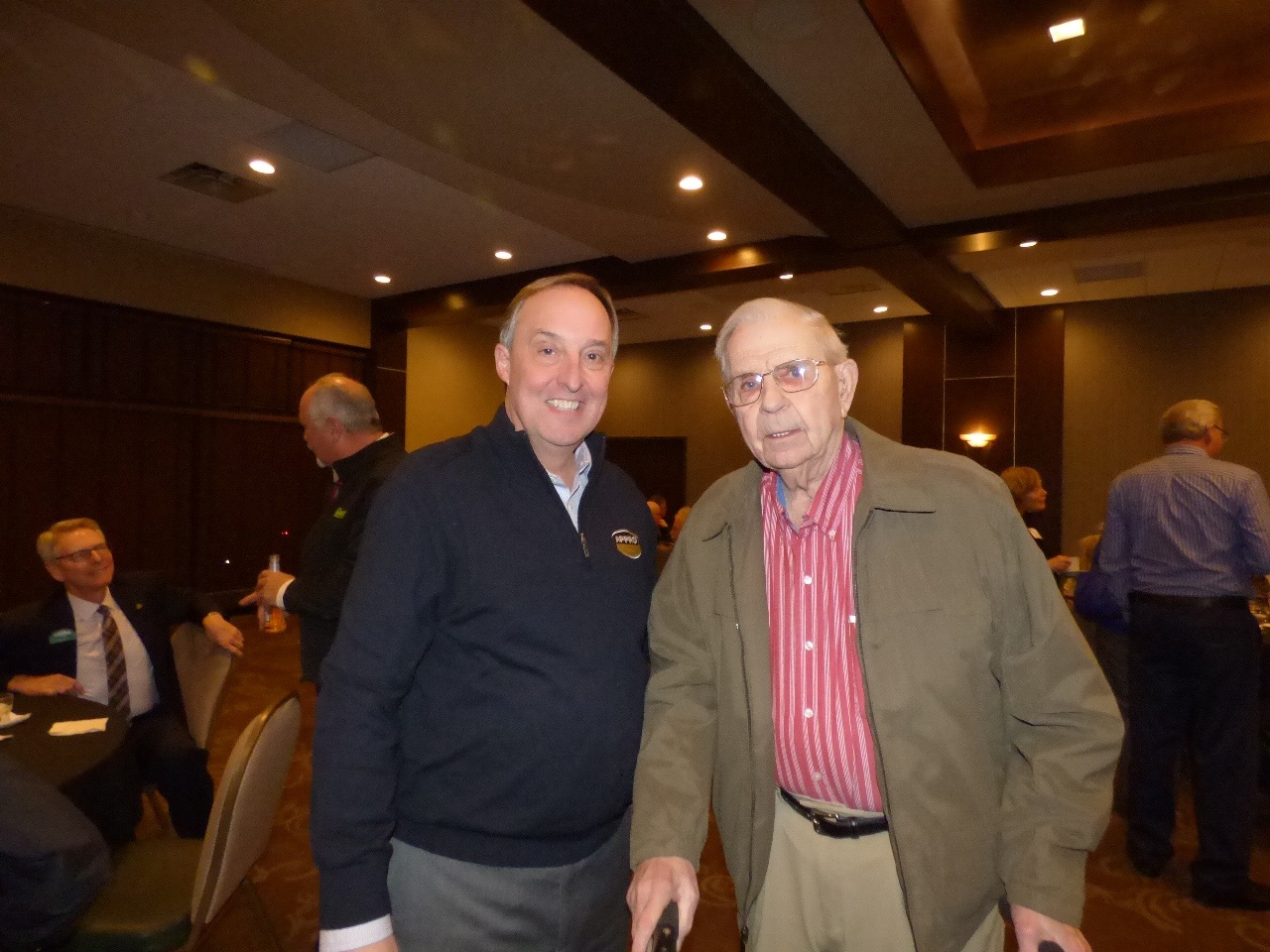 You may learn more about Maynard in the following articles and links:

THE LIVES ONE PERSON TOUCHES

We thank you for allowing us to share a few of our favorite memories of Maynard with you. Our lives have been forever touched by Maynard’s guidance, wisdom and contributions to not just to us personally or to our companies, but to our greater community of Lakeville, Minnesota.

Our hope is that by sharing a few of our memories, your lives may be touched by the legacy he left, too!

If you have a memory of Maynard, we would love to hear from you.